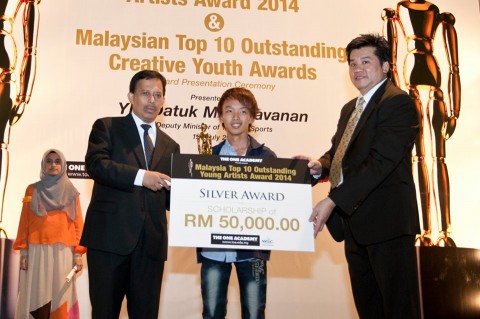 Artist Jayden Yoon attends the 17th Annual Art Competition of Malaysia Top 10 Outstanding Young Artists Award, under the topic of “rescue mission” that was hosted by The One Academy and supported by Walt Disney Studios at Sunway Pyramid Convention Centre, Bandar Sunway, Malaysia on July 19, 2014.

In placing 2nd he received:

Malaysia is heading towards a knowledge-driven economy and The One Academy has responded to this by supporting the growth of the creative new media industry. One such projects that The One Academy had embarked upon in the past 16 years in collaboration with Walt Disney Studios Malaysia, is the joint launching of Disney • Pixar’s animated movies in Malaysia with an annual art competition.

The Malaysia Top 10 Outstanding Young Artist Award 2014 aims to inspire and reward enthusiasts of new media and multimedia design. Furthermore, this is also an exciting platform to motivate and inspire talents to further develop their skills professionally.

This year, the 17th annual award will be held in conjunction with the release of ‘The Plane 2: Fire and Rescue’, a movie that will be released in September 2014.