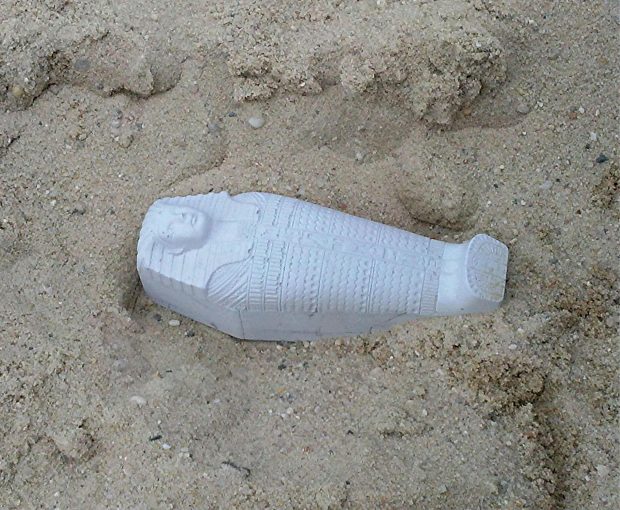 New York- If you found yourself surprised to unearth a seven inch concrete Egyptian sarcophagus while at the beach in New York or New Jersey this summer, a Queens, NY artist can tell you why. It began in the summer of 1974 when the artist, a mere 5 years old at the time, was playing on one of the many beaches of the Jersey shore. He was digging in he sand, deep in play with his GI Joe Secret of the Mummy’s Tomb set.  When the hour grew late his Mother told him to pack up, and much to his dismay he could not find the sarcophagus he had buried. He had his GI Joe, he had Joe’s vehicle, but the mummy and sarcophagus were lost beneath the sand.

“As a young boy growing up in the 70’s, there was no toy I loved more than my GI Joe. I carried a “Joe” with me everywhere I went as did most boys my age.” says the artist. “When I lost the sarcophagus from my  GI Joe Secret of the Mummy’s Tomb set on the beach that summer I cried all the way home, but them my Mother said something that I remember to this day” recalls the artist. His Mother’s insight? She said “I know you are sad that you lost your toy, but think how happy some little boy or girl will be when they are digging in the sand and find it. It will be like a real buried treasure!”

Now 42 years later the artist has returned to the beach to pay tribute to a long-lost toy.  During the summer of 2016 he created 74 solid cement replicas of the original sarcophagus from the vintage GI Joe Secret of the Mummy’s Tomb set and buried the sarcophagi on beaches in New Jersey and New York.  “My goal was to bring a bit of unexpected wonder and happiness into the lives of people. Finding a “buried treasure” is a memory that a person, especially a child, will carry with them for a lifetime. The artist created the replicas sarcophagi in cement because of the material’s durability. He has chosen to remain anonymous to both shield himself from any Hasbro lawyers who might take issue with his artistic tribute to GI Joe as well as to maintain focus on the art, not the artist. “This isn’t about making money” says the artist, “this is about making fun”. The artist buried each sarcophagus 6-8 inches below the surface of the sand and deliberately chose popular areas of the beach. “The goal is for them to be found, not to stay hidden” the artist remarked. His next project? The artist smiles and simply replies “It’s a secret”.