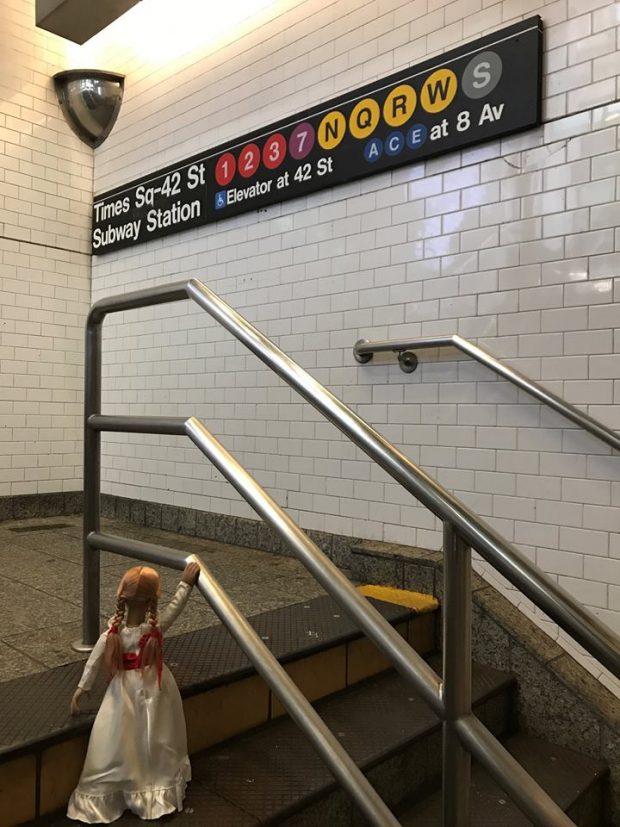 Annabelle: Creation is the follow up to 2014’s hugely successful “Annabelle,” which scared up nearly $257 million at the worldwide box office during its run in theaters.  The new film is once again being produced by Peter Safran and James Wan, who previously partnered on “The Conjuring” hit movies.

In “Annabelle: Creation,” several years after the tragic death of their little girl, a doll maker and his wife welcome a nun and several girls from a shuttered orphanage into their home.  They soon become the target of the doll maker’s possessed creation, Annabelle.

On Friday, August 4th a group of 13 Annabelle dolls, created by the award winning Mezco Toyz,  will “take over” Ripley’s Believe It or Not! Times Square, the largest Ripley’s museum attraction in North America. The Annabelles will attempt to hide among the Odditorium’s collection of over 500 unusual artifacts from all over the world as well as within its amazing interactive exhibits.

All Ripley’s Believe It or Not! Times Square visitors on August 4th, 2017 will receive a special map of the location. Eagle eyed visitors who correctly indicate all 13 of Annabelle’s hiding places throughout the Odditourium will have an opportunity to receive tickets to attend a preview screening of Annabelle: Creation, which opens nationwide on Friday, August 11th.  Select guest will also receive other Annabelle :Creation goodies from New Line Cinemas and Warner Brothers, as well as surprise goodies from MezcoToyz.com.

Visitors will also have a special photo opportunity to pose with the demon who possesses Annabelle. Guests who post their images to social media using the tags of #Annabelle #AnnabelleCreation #AnnaBelieveItorNot #mezcotoyz

Will have an opportunity to win one of the 13 Annabelle created by Mezco Toyz.

Ripley’s Believe It or Not! Times Square will open it’s doors to brave thrill seekers from 5pm-Midnight on August 4th.

For more information and directions to Ripley’s Believe It or Not! Times Square visit:

For information on Annabelle: Creation visit:

When: Friday, August 4th from 5pm until Midnight

Photo courtesy of Ripley’s Believe It Or Not!