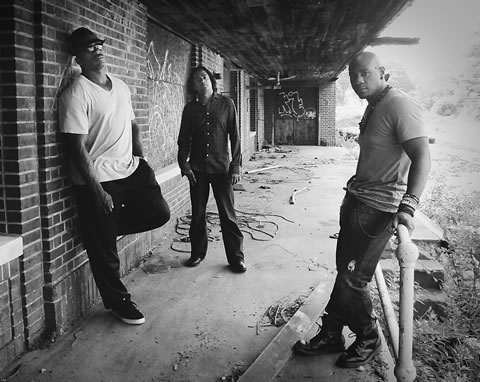 “CORE”, the new ARJUN album has been met with critical acclaim.

ARJUN’s new album Core (Pheromone Records) is the follow up to their critically acclaimed Space. ARJUN teams up with legendary producer/mixer Scotty Hard (Bjork, Wu-Tang Clan, Antibalas, Arto Lindsay, MMW, Charlie Hunter, Sex Mob) for the album mix and John Medeski (Medeski Martin & Wood) for some organ work on the title track resulting in “a lavish display of rock and jazz” according to Sell Out Records.

ARJUN, the three-piece instrumental band from New York, has been trailblazing their own hybrid of rock and improvisational jazz since 2003. Made up of Eddie Arjun Peters (guitar), Lamar Myers (drums), and Andre Lyles (bass),  ARJUN fuses the power of rock with improvisational alternative jazz, resulting in a delicate balance of intricately crafted melodies backed by powerhouse musicianship. After signing with Pheromone Records in 2006, ARJUN released their debut album Pieces followed by 2013’s Space, the first installment of a planned trilogy. ARJUN’s most recent album Core, second in the trilogy, is a reinvention of ARJUN’s sound and style, rooted in carefully crafted melodies
which tell resonant stories without words.

Core was recorded at Level 11 Studios, New York, NY. The album was mixed by Scotty Hard at Duro of Brooklyn, Brooklyn, NY, and was mastered by Michael Fossenkemper (Soulive, Bootsy Collins, Herbie Hancock) at Turtletone Mastering, New York, NY. “CORE” is near perfect in every way. ARJUN are steadfastly moving instrumental rock into the future, taking with it the noble heritage of the past. – Jamsphere

For more info about ARJUN, go to: www.arjunmusic.com