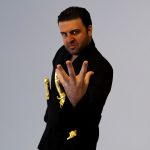 Three Sephardic-themed productions — two Shakespeare classics and a Verdi opera – are presented in 2016 Off-Broadway in the theater located at the Center for Jewish History (15 W. 16 St.) in New York City. MERCHANT OF VENICE last January, followed by NABUCCO last April were both SOLD OUT, and from June 16-30 OTHELLO.

This trio of productions follows last year’s debut of MERCHANT OF VENICE – which uniquely included Sephardic ladino songs incorporated into Shakespeare’s text – at the Center, marking the first time the museum and their performance space, located in Chelsea, a theater production presented by the AMERICAN SEPHARDI FEDERATION.

OTHELLO – William Shakespeare’s renowned tragic play will be presented in a Moroccan style including Judeo Arabic songs, and Verdi’s Otello excerpts bringing Shakespeare’s drama of race, deceit and murder back to its Moroccan origins.

The costumes are inspired by an Arabian style since the play is set in Morocco. David Serero is no stranger to this country, since he is a Sephardi Jew from Morocco.

June 23rd at 8pm (Opening night – Followed by a reception)

June 28th at 8pm (Followed by a Closing night reception)

David Serero is one of the most sought after performer who is known as an “actor’s actor”. The wide variety of roles (from Opera to Classic Theatre and Broadway Musicals to Comedy) that he has played and the quality of his work have earned him a worldwide reputation as a versatile talent.

David Serero is a Parisian-born, classically trained actor and baritone, who has performed operas, and more than 1000 concerts around the world, including numerous venues in NYC and starred in more than 100 films. He has appeared in several musicals, Operas and classical plays, and performed sold-out solo concerts at the Snapple Theatre Center in Times Square. In 2012, he made his sold out WEST END debuts at the Dominion Theatre. In London, David performed at the Wembley stadium and at the Royal College of Music. In Paris he starred as Don Quixote from MAN OF LA MANCHA and as Happy Mac from BEGGAR’S HOLIDAY by Duke Ellington. He has recorded a duet with JERMAINE JACKSON and produced his Jazz album. He performed two concerts on TIMES SQUARE for Best of France. He has recorded several albums including a FRANK SINATRA tribute album, SEPHARDI (an album of Sephardic songs), HABANERA (a modern version of Carmen Opera with beatboxer Mythe Box) and ALL MY LOVE IS FOR YOU (with songs written by himself).  This season in New York, he starred as Shylock from Shakespeare’s MERCHANT OF VENICE, title role of Verdi’s NABUCCO at the Center for Jewish History, and Verdi’s RIGOLETTO and Mozart’s DON GIOVANNI at the CARNEGIE HALL. David Serero’s official website: www.davidserero.com