“It’s just obvious to us. Everyone is so fed up with the media’s bombardment of girls with pink unicorns and high-heels for toddlers,” says Miriam Lottner, co-founder of Gangly Sister. “It was just a matter of time before we ladies took things into our own hands.”

Taking things into their own hands is precisely what Gangly Sister is doing. The founders are parents, and they realized that they could simply produce their own content rather than wait for Hollywood to come around.

“It’s just like any startup,” said Lottner. “We saw a problem and set out to solve it.”

Gangly Sister will be coming out with the pilot for their animated series, Purple and Nine, later in January. 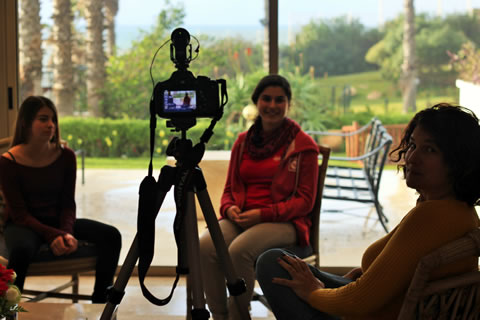 The Year of the Girl video was a by-product of their work on the animated series. The team met with a lot of moms and girls who wanted to be involved, so they came up with the idea of a monthly interview with girls on different questions. In February, they’ll be coming out with a video about love. They are also planning on letting fans submit their own video wishes.

The Gangly Sister team is setting out to provide clean and funny entertainment for girls, and at the same time expose them to different types of technology. One of the main characters, Purple, enjoys robotics and likes to build things. She’s excited that her 3D printer can make a robot, but she also uses it to make jewelry.

“When girls are involved in creative projects, it doesn’t matter if you call them science or art. It’s just a creative project,” said Lottner. “We want them to know that they can use their energy to create new things and solve problems in the world.”

Having more girls exploring science and technology is definitely a worthy goal. We’ll find out soon if Gangly Sister is up to the task.