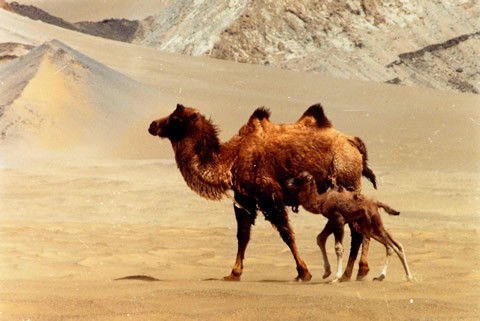 120 years ago, wild double-humped camels which survive in the Gobi desert on salt water with a higher content of salt than sea-water, were found across the deserts and steppes of southern Mongolia, north-west China and Kazakhstan. Unfortunately, years of persecution have reduced the species to less than 1000, split into four fragmented populations, one of which is in Mongolia. The Red Book Listed species, hunted for their meat and hide over the centuries, continue to be persecuted as food for illegal miners, targets for a burgeoning wolf population and are victims of land degradation and poisoning by mining interests.

In 2004, with the formal approval of the Mongolian Ministry for Nature, the Wild Camel Protection Foundation (WCPF), a UK registered charity, established the Hunter Hall Wild Camel Breeding Centre, the only captive wild camel breeding centre in the world. Starting with 8 wild camels, there are now 28. This success means that the captive wild camels have to be managed and fed hay in the winter when temperatures go down to – 40 degrees Celsius. This hay costs £7500 EVERY YEAR, of which more than 50% consists of transport, because quality hay has to be trucked 1200 kms into the Gobi. Without it, the captive wild camels would die or be unfit when their time came to be released in into the desert. The Foundation is asking animal lovers everywhere to donate to the WILD CAMEL WINTER HAY APPEAL via Crowdfunder. Please help this unique and wonderful breed of camel, which is listed by International Union for the Conservation of Nature as“critically endangered”, to survive. Donate now at http://www.crowdfunder.co.uk/wild-camel-hay-project