Hope is in China Internet

I have a friend named Edward. Once we were chatting, he told me that on 4th Nov., he accidentally joined a motorists’ club community APP social media marketing activity in WeChat (China version of “whatsapp”) named Chelun APP and easily get 100 RMB ($15) gas card bonus. It is said that this activity attracted more than 13 million people to take part in. 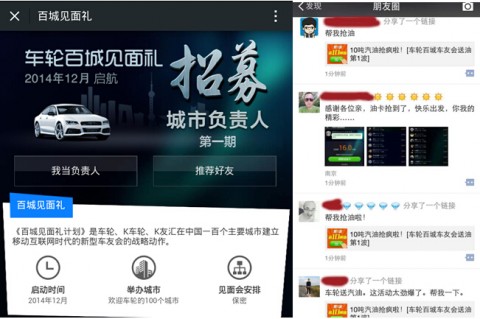 This is a surprising number, we know that before Gangnam Style gets popular, its click rate was just 28.1 million. It’s hard to imagine the value if all the 13 million people are car owners or potential car buyers.

China mobile internet has lots of chances. First, this is because of the 632 million netizens (almost 527 million mobile netizens) there. This number is almost the number of Europe plus North America.

Second, there are lots of innovating companies. Edwards told me he never pay money when he take a taxi in China because he installed both Didi Taxi and Kuaidi Taxi in his mobile. He also told me he is planning to purchase products of 100 RMB on 12th Dec. since the newly listed company Alibaba on Wall Street plan to give back 50RMB for those who pay offline with Mobile Wallet. This is crazy.

We can predict that China’s Internet Market Development will be way faster than any other places around the world. You will find Chinese people will be the first one who popularizes Mobile Wallet. In the year 2000, friends who visited China told me that there were few places where can use cards, but after a few years, those Chinese who visited Time Square would say there are few places in America where they can use Mobile Wallet. These changes all brought by Mobile Internet. Alibaba is changing China’s retail market, truly promote O2O，real mobile generation consumption. Just like Chelun APP, would be China version of AAA someday, real mobile generation motorists’ club.

This reminds me an article from Southern China newspaper 100 years ago said: Americans are very rich people. They want the Chinaman to come and make him very welcome. There you will have a great pay, large houses and food and clothing of the finest description… It is a nice country, without Mandarins or soldiers. All alike; big man no larger than little man…” I think, these words also work if we change China and America right now.

Though it’s just a small talk, but no matter to netizens, practitioners or Internet companies, it always seems to be more chances in the other side of the ocean.

When I asked Edwards with complex mood if we still have chances, he recommended me a magic food called “Spicy bar”. He said nearly all Chinese students recommend this food to foreign teachers. Edwards think if this magic food can be popularized in America, it would be another empire of Mcdonald’s.

Maybe, after I received the magic food he sent from overseas.

Youngman, though this is just a personal opinion, but the industry of China Internet is real similar to Silicon Valley 20 years ago.