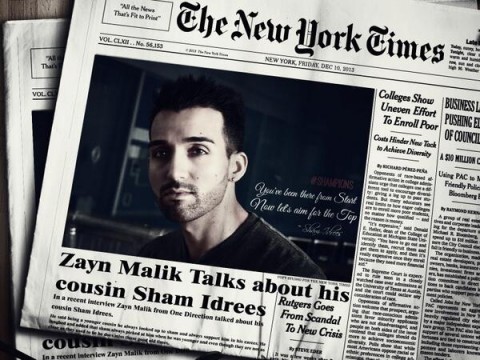 In a recent interview Zayn Malik from One Direction, we talked about his cousin named Sham Idrees. He said that being a younger cousin he always looked up to Sham, and always support him in his career. He laughed and added that Sham always picked at him when he was younger, and even though they are not as close as they used to be he does miss those good old days.

Sham Idrees is Zayn Malik’s 2nd cousin from his father’s side. He was born in London, UK and moved to Canada at the age of 16. He was spotted alongside Zayn Malik various times during 2011.

Sham Idrees has recently been the talks of the social media and has very die hard fans whom he calls #Shampions. It would be exciting to see the two cousins collaborate sometime in the future. For now we are happy to have listened to good musicians of two different worlds, and genre from the same family.