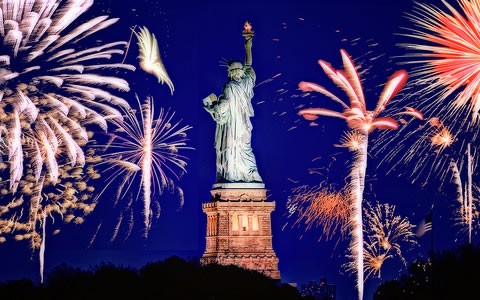 New York is a wonderful state with a very rich history, and is also home to New York City which is the most populated city in all of the United States. Just a short drive from the downtown area of New York City, you can travel to an entirely different world in upstate New York where there are orchards, farms, and open area galore. Though most people think of Manhattan when they think of New York, the vast majority of the state is much more rural and open than you would imagine if you’ve never visited before.

When it comes to the 4th of July, very few state celebrate our nation’s independence quite like New York. New York is widely considered a symbol of freedom and liberty throughout the world, and on Independence Day there are few more places that remind you of patriotism quite like New York does. However, that doesn’t mean that you can run around lighting off firecrackers and other fireworks whenever you like, even if it is a popular tradition on the 4th of July in America. On the contrary, fireworks laws are actually quite strict in New York, and when you look at the history of the state, New York City in particular, it’s pretty easy to understand why.

In the state of New York, all consumer fireworks are considered illegal. There are a few exceptions to this rule in certain areas, but even then you’ll still need special permitting in order to enjoy even the smallest consumer grade fireworks. Even if you want to buy sparklers in New York you need to have special approval from your local government officials, and usually you need to take a training class and pay for a license before you’re allowed to even use those. Each year the state gets closer and closer to passing laws that allow the use of small fireworks like sparklers and smoke balls, but as of now the law still remains the same.

Though most consumer grade fireworks were legal at one point in the state of New York, world events changed the view of even allowing small fireworks like sparklers that many people would consider harmless. After 9/11, it was feared that even sparklers could be used to create some type of terrible weapon, though most experts agree that the amount of sparklers it would take for this purpose would be so ridiculous that it simply isn’t practical.

The good news is that legislators in New York state are working diligently to get this laws changed so the citizens of this great state can enjoy the simple pleasure of consumer fireworks on the 4th of July. Most people can understand why large fireworks like bottle rockets are illegal, but small items like sparklers that have long been a pastime in our nation should be allowed at every adult’s discretion.