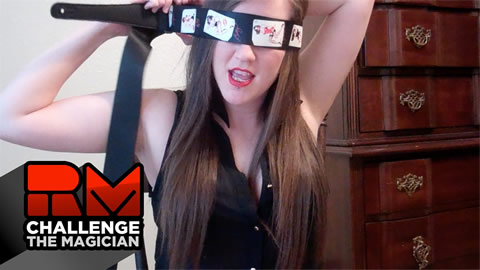 New York magician, Jonathan Real is taking magic a step farther. Best known for his magic-infused celebrity interview show “Real Magic TV,” Real is opening the show up to its viewers, taking magic trick suggestions from around the world.

The new series called “Challenge the Magician” (found at: http://www.challengethemagician.com) invites viewers to record video requests of their own magic challenges and send them in for Real to attempt to accomplish on the show. The ideas are sent as YouTube videos and range in length from 30 seconds up to 8 minutes.

After the videos are submitted, they are posted to the site, and viewers from around the world are invited to view them and vote for their favorites. The videos with the most votes will become a part of the big show in which Jonathan will directly take on the challenges.

You can watch all of the fun, and submit your own challenge for Jonathan to attempt at:

The episodes will premiere on television platforms via Hulu this Spring, and will be available for online viewing shortly after via the official Real Magic TV site and through a content partnership with YouTube.

The first interactive episode will be centered around seeing through blindfolds. People of all ages have sent in suggestions with a range of blindfolding-items including bandanas, scarves, tape, belts, cardboard, tin foil, swimming goggles, and even peanut butter.