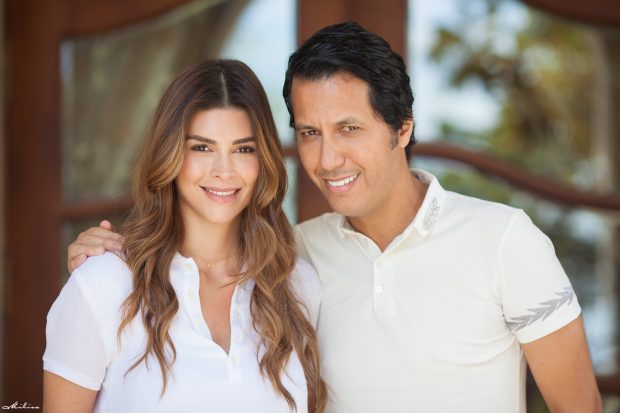 37 years old Model, business entrepreneur and fiancée of real estate millionaire Mohamed Hadid, the father of super models, Bella and Gigi Hadid, Shiva Safai, in an interview with Al Arabiya English’s Simo Benbachir, who is the first TV Moroccan personality to cover events  like the Grammys and the Oscars and has interviewed top international personalities and celebrities.

She revealed everything from her engagement, to her appearance on Second Wives Club, future business projects and other in-depth issues that have never revealed on TV or any other media channel.

During her sit down with Simo, Shiva Safai revealed that her modelling career started out as a fun hobby that transpired into photo shoots, magazine covers, and features. Business, on the other hand, has always been second nature. “I’ve always had a passion for business and being an entrepreneur” she said; and this passion has helped her maintain her “criminal background check” company that has been in operation for about 11 years.

Mohamed Hadid and the Key to a Happy Relationship

According to Shiva, Mohamed is a kind and passionate man, very funny and a philanthropist whom she admires and respects a lot. From her experience with her fiancée, Shiva believes that the key to a happy relationship depends a lot on the couple having the same values, same interests, which will enable them enjoy each other, also a great deal of communication and respect for each other.

Starring in the reality TV show made Shiva very proud, not just because it was fun but because, unlike other Women TV shows, it focused on women empowering and supporting one another through tough times. It also projected their individual relationships with family and happenings in their lives, as opposed to the regular drama and rivalry.

Being raised in a close knit family, her parent’s values, guidance and opinions are very important as they have shaped her life. Mohamed and her friends also form a large part of her value system.

For anyone who wants to succeed in the states, it is very important that you follow your dreams and stick to your passion.  America is the best place to achieve your dreams as long as you believe in yourself, stay true to your dreams and work hard.

On the other hand, Hadid eye wear is set to launch in Dubai and 5% of the proceeds will be donated to the Vision for Children Foundation, a Non- profit for Children with optical disorder and blindness.

Greater things are still to come from the reality TV star and business entrepreneur.

To watch the full interview, you can click on the link below; https://goo.gl/L1sCQ4