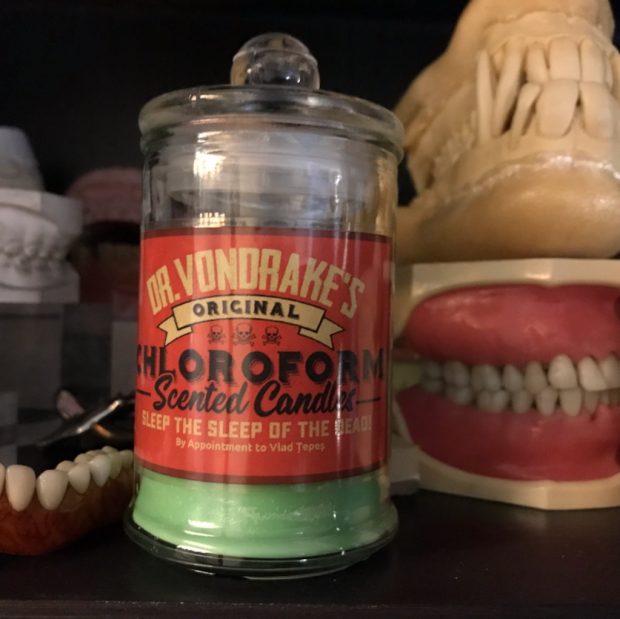 New York- Believe It Or Not, he’s been immortalized in one of Ripley’s comic strips as well as several of their books. He’s been featured on episodes Oddities on The Discovery Channel, and had his home profiled in Time Out New York. He has even been called upon by government agencies to utilize his arcane knowledge. So it should come as no surprise that author and artist Mike Drake created a special holiday candle that would cause the staff the local Yankee Candle outlet to faint; a chloroform candle.

Drake created the chloroform candle as a “Halloween Treat” (or is it a trick?) for 50 of his friends and after being featured in a short video by social media influencer Jennifer Hoffine they have become the “must have” item of the holiday season. This isn’t the first time one of Drake’s waxworks has created a commotion. After Academy Award winning director Guillermo del Toro proudly displayed one of Drake’s gillman shaped candle during an appearance at The Museum Of The Moving Image he was inundated with inquires to produce more.

Drake, known for his modern cabinets of curiosities, created the chloroform candle’s label to be reminiscent of that on a patent medicine bottle. “The jarred candle should fit in nicely with any display of vintage apothecary wares” remarked Drake. Drake has no plans of marketing the candle or of producing more. He insists it was a one time Halloween treat and creating more would cheapen the sentiment of the gift.

But the question remains, do they really smell like chloroform? “No” explains Drake, “Chloroform is sickly sweet and very medicinal smelling. If the good folks at Koo-Aide made industrial disinfectants they would probably smell like chloroform. The candles that bear my Dr.VonDrake Original Chloroform Scented Candle label are rose, lavender, and green apple scented. In this case, the fun is the label not the actual scent.”

Drake is currently working on a new book focusing on the legend of the FeeJee Mermaid and reminds everyone to obey the four rules of Halloween.